Bob Kolb had a very musical childhood. Starting piano lessons at the age of 8, he quickly switched at age 9 to his life-long love of the saxophone. Early listening to his parents' big band recordings drew his attention to that instrument.

His parents made sure he and his brothers had private instruction with their instruments, driving substantial distances in the process. They brought Bob to the Ritz Ballroom in Bridgeport to meet his hero Tex Beneke (Glenn Miller orchestra leader post WWII, and his own band after 1950). 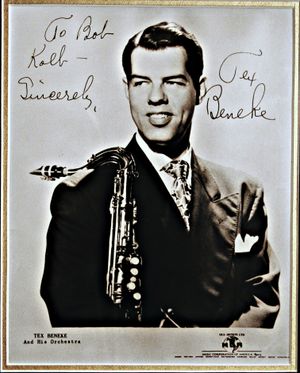 At age 14 Bob was playing at local schools and dance halls with a band he and his brothers had formed – the Highlanders. At age 15 he and his brother Pete were playing Catskill Mountain resorts, gaining tremendous experience.

His undergraduate college years at the University of Rochester enabled him to study saxophone and clarinet at the Eastman School of Music followed by graduate studies on saxophone at Northwestern University with Frederick Hemke. 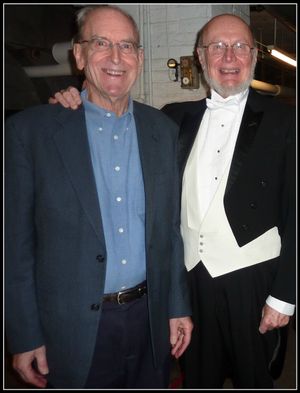 Bob and Fred Hemke after Fred's performance with the
New Haven Symphony, Woolsey Hall at Yale, 2/27/14

While at Northwestern he was hired to play with the Ralph Martieri and Ralph Flanagan big bands and jammed with notables such as Sonny Stitt and Benny Green. He also backed Nancy Wilson.

His playing style reflects the melodic inventions of the Masters such as Lester Young, Stan Getz, and Paul Desmond.